We’ve come a long way, baby!
I’ve shared with you some serious and useful car seat safety information in Part 1 and Part 2 of this series, but now I’m ready to just take a fun car trip down memory lane! I was one of those babies who made it to childhood in a basket in the back of the car. Really!
Here’s my first transportation, a Mustang convertible, on the streets of San Francisco: 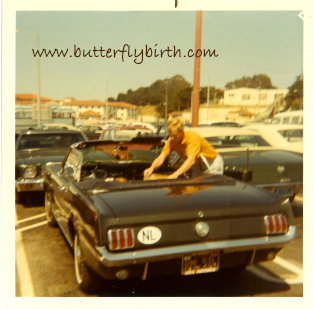 And here is my ride in the back seat:

This was in 1972. Notice the complete lack of straps! (Among other major differences, obviously!) Big babies run in my family and clearly I was spilling out of this seat by two months so my parents upgraded my digs. They also sold the fun convertible as new parenthood apparently aroused in them a new sense of safety and responsibility. So here I am, still unrestrained in any way, of course, in my multifunctional carriage / crib / car seat in the back of the new family car, a Mazda station wagon: 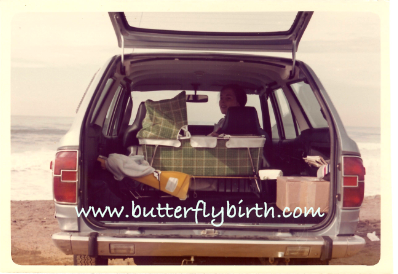 My baby sister enjoyed a more modern car seat. Here we are in 1977:

Apparently, according to my mom, this contraption was the thing to have! The bee’s knees of car seats, if you will. It was rear-facing and was touted as being impact resistant.
Then came our big station wagon, a Mercury Zephyr. My dad rigged up a fan in the back, where we had a foam mattress, sleeping bags, pillows and books, and we were good to go! This I remember. It was fun back there! Again, not a seat belt in sight. How my kids would LOVE to ride around like this! Ah, those were the days!

I eventually learned to drive in this tank of a car!
It’s interesting to think about how things have changed. The first seat belt law was a federal law that required all vehicles (except buses) to be fitted with seat belts in all designated seating positions and this did not take effect until January 1, 1968. New York was the first state to pass a law which required vehicle occupants to actually wear the seat belts, and that wasn’t until 1984!
The first child passenger safety law passed in Tennessee, requiring parents to put their infants and young children in Child Restraint Systems that met the federal standard of the time. This law took effect in 1979 and prompted legislative efforts to begin in other states.

Here is an interesting look at the evolution of child passenger safety over the years:

Today’s parents have an abundance of choices, decisions, (conflicting) information at their fingertips, potential liabilities, fears and concerns. So I think it’s good to put them in perspective from time to time. I hope you enjoyed sharing my trip down memory lane!